With district cooling, cooling in the form of cold water is generated in the company's own centres with highly efficient refrigeration machines. The water is cooled down to five to six degrees celsius and distributed in the customer's building via an in-house cooling system. There it absorbs the heat from the building. The heated water is then cooled again with water from the Danube Canal. This type of building cooling saves up to 70 % electricity and 50 % CO2 compared to conventional air conditioning systems. With an output of 15 megawatts, the Stubenring district cooling plant will replace the equivalent of around 6,000 conventional air conditioning units.

AGRU Kunststofftechnik supplied several hundred metres of PE 100-RC pipes in outer diameters between OD 560 mm and OD 710 mm for the new district cooling pipeline. Segmented bends, tees , E-couplers and other fittings were used for the connection. AGRU also provided an electrofusion welding machine, a round pressing device and peeling chain. The pipeline was professionally installed by Kraft & Wärme Rohr und Anlagentechnik GmbH. To enable the cooling water from the Danube Canal to flow to the refrigeration machines, an intake basin will be built on the Treppelweg next to the Schwedenbrücke. The new basin for re-cooling and the district cooling centre at the Alte Post are connected by the PE 100-RC pipe system.

The AGRULINE pipes have to cross the Franz-Josefs-Kai and the tracks of the U4. For this purpose, the pipes are laid in concrete ribs above the tracks. Construction will only take place during the night on working days so as not to disrupt the operation of the underground. With the help of water from the Danube Canal, the new district cooling centre will supply offices, hotels, shops and flats covering an area of 300,000 m2 with climate-friendly cooling. Wien Energie has been using district cooling since 2007. Currently, 16 district cooling centres ensure that people stay cool on hot days. The district cooling network, which is more than twelve kilometres long and has a total capacity of around 130 megawatts, cools an area of more than 2.5 million m2 throughout Vienna. 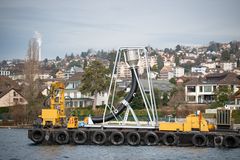